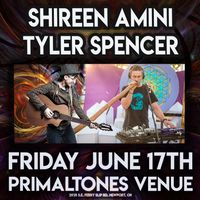 This will be a special night of music as two talented musicians reunite for an evening of inspired music. Shireen Amini and Tyler Spencer have a friendship and musical connection that goes back many years. They've recorded and performed together in the past combining percussion and didgeridoo to create a fantastic musical combination that is high energy and from the soul. They will be playing solo sets of their own music, and collaborating together for an evening of music inspired by multiple genres including: latin, hiphop, rock, folk, didgeridoo, edm and dance music. This is going to be an event not to miss!

Tyler Spencer is a didjeridu player and producer with over 20 years experience performing, teaching and making didjeridu. He has performed internationally, and has collaborated with a variety of musical and performing acts. His music has also been showcased on movie and television work, most notably the HBO series “Dexter”. His solo performances incorporate live didjeridu with self produced beats and have been described as rhythmic, otherworldly and capable of transforming a captivated crowd into a dance party..

Bar service with local micro brews, cider and kombucha on tap. We also have a fine selection of wine, prosecco, hard seltzers, light beers and non-alcoholic options too. Basic menu in house with full menu provided by Mollies Cafe. Our outdoor social area and the fire pit will be set up too.

Primaltones Venue is located in beautiful Newport, Oregon in Aquarium Village. Hotels are within walking distance of the venue and plenty of bay front sights and restaurant options nearby as well.